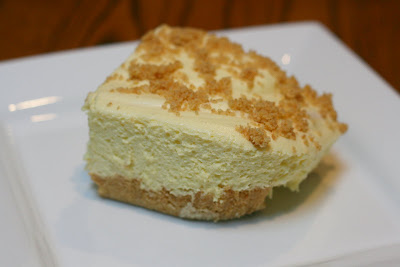 My Grandma has been making this cheesecake for over 40 years. She pinched the recipe from the restaurant kitchen when she worked at Woolworth's in the early 1960's. (It's also known as Woolworth's Icebox Cheesecake.) This cheesecake has been a favourite in my family ever since, and makes an appearance at every major family function and holiday gathering. I had the pleasure of spending an afternoon at Grandma's the other day learning how to make this classic dessert. It's easier than I expected, although a stand mixer (which I do not have) is a definite must. It could be put together using an electric hand mixer but would require a bit more time and effort.

1. Mix 1 1/2 cups graham cracker crumbs and melted butter together in a bowl. Press crumbs into a deep 9x12 inch baking pan, covering the bottom and up the sides about half an inch. Reserve the other 1/2 cup of the crumbs for topping. Refrigerate crust until ready to use.

2. Add cream cheese, sugar and vanilla to a small bowl of an electric stand mixer and cream together until smooth and well blended, about 3 minutes. Set aside.

3. Add milk to a large bowl an electric stand mixer and whip until stiff peaks are formed.

4. While milk is beating, prepare gelatin. Mix gelatin powder with boiling water and cold water. Mix well to dissolve powder but do not allow to congeal.

5. While mixer is running, slowly add gelatin mixture to whipped milk. Mix together on slow speed for 1/2 a minute.

6. While mixer is still running, slowly add cream cheese mixture to whipped milk. Mix together on slow speed for another 1/2 minute or until all cream cheese is incorporated. 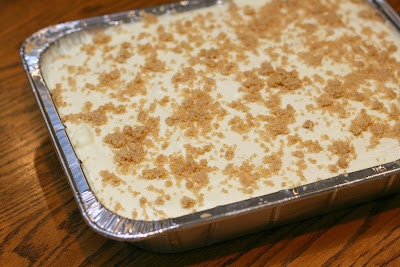 About This ~ About Me