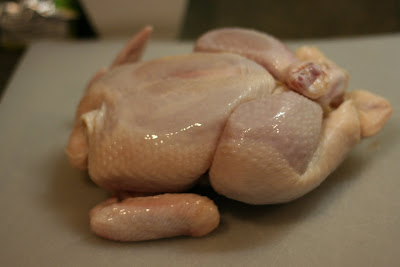 I just finished week 8 of my Surf & Turf cooking class over at CHEESESLAVE. This week we learned about roasting and braising meats and sauce reductions. Recipes included pot roast with gravy, braised short ribs, Moroccan chicken, lamb chops, pulled pork and roast duck, among many others! Also included in this class was a video about how to roast a chicken. Ann Marie doesn't cover brining in the videos, but briefly mentions it and includes some direction in the recipes.

Last year when I cooked my first ever Thanksgiving turkey, I brined my turkey in a mixture of water, salt, honey and citrus zest. Brining poultry before cooking leads to juicier and more tender meat. My turkey was a huge success. My brother-in-law declared it was the best turkey he had ever eaten. I would like to think it was just because I cooked it, but I'm quite certain the brining had something to do with it.

The problem with brining is that it takes time. A large bird (10lbs or more) requires 12-24 hours to brine then an additional 12-24 hours to "dry" (a wet bird won't cook or brown well). A smaller bird can be brined adequately in 3-12 hours and left to "dry" for 6-12 hours. Basically, if you want to brine your bird, you should start 2 to 3 days in advance of cooking. It's not as much of a pain as it sounds. Preparing the brine takes minutes and once the bird is in the solution, you don't have to do anything until you take it out of the brine! Don't forget you also need at least an hour (for a small bird) before cooking so the bird can come to room temperature before putting it in the oven!

A basic brine includes salt and a sweetener. More advanced brines will include flavour enhancers like citrus zest or dried herbs. The one I used for my turkey last year included lemon and orange peel, cardamom pods and dried thyme. For my roast chicken though, I wanted something very simple and very basic.

Cooks Illustrated has a great PDF with loads of info and tips on brining. They recommend the following ratios for a basic brine:

Per 1 litre (1 quart) of water add 1/4 cup of fine kosher or sea salt (1/2 cup if salt is course) and 1/2 cup of sweetener. One litre (1 quart) of liquid is required per pound. They also say it should not exceed 2 gallons of brine, but you need enough to cover your bird so if you are cooking a large chicken or turkey, you may need as much as 3 gallons of brine. They also say to brine for one hour per pound, but for no more than 8 hours.

My brine didn't follow the Cooks Illustrated model exactly but it was close. I adapted my brine from the Healthiest Meals on Earth cookbook. It looked something like this:

And contrary to what you may have read online, you CAN use a metal pot to hold your brine - just make sure it is stainless steal or enamelled cast iron (like Le Creuset). Do not use aluminum or straight cast iron as metal can leech into your brine and affect the taste. You can also use glass or plastic container or a plastic brining bag. Do not use a garbage bag as they are not food safe. You may need to weigh your chicken down with a plate to ensure it is completely submerged.

When you are ready to cook your bird, take it out of the refrigerator and leave it to sit, covered, at room temperature for at least one hour.

Next time... Basic Roast Chicken
Posted by IamJill at 4:12 PM

About This ~ About Me